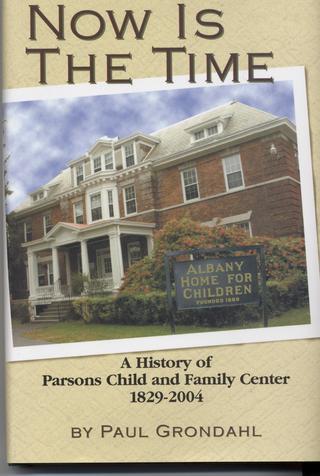 A lively narrative history of one of America's earliest orphanages.
Order the book direct from Parsons

Driving up New Scotland Avenue many decades ago, past the Albany Hospital and Albany Law School, the car turns left onto Academy Road and pulls into a circular drive. There is the crunch of tires on gravel and the soft rustling of autumn leaves as they're blown across the ground by a gust of wind.

Sitting low in the car's back seat, a small boy cranes his neck and peers up and out the rear window. All he sees is a canopy of trees, gaunt and ghostly shapes, framed by a web of twisted branches that seem to envelop the car. The ancient and gnarled oaks loom tall and ominous, a brooding and silent presence that matches the child's mood. The trees cast sinister shadows across neatly tended triangles of grass. The tips of the branches nearly touch a broad porch punctuated by bright white columns that front the substantial red brick building.

The boy is frightened about being delivered to this unknown destination. A judge sent him here and he's scared, fearful he may have broken some law. He feels heartbroken, sad, and a little angry, too, because he thinks that nobody wants him. In his child's mind, he thinks that's why he's been sent here -- because nobody loves him. That's the way he's come to consider himself: Nobody's child.

And he also imagines he did something terribly wrong to be given over to this strange place. This boy, a tightly wound bundle of emotions and fears, is deposited on the doorstep of the Albany Home for Children. It is fall in the middle part of the twentieth century, and this scenario is repeated on a weekly basis. The boy has all the jittery adrenaline and feral awareness of a cornered animal, ready to choose at a moment's notice between the primal insight of fight or flight.