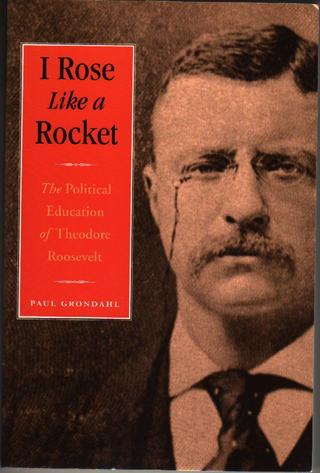 A rollicking tale of how the 26th President of the United States learned the art of the political game in the New York State Legislature in Albany, N.Y.
Order the new paperback edition directly from University of Nebraska Press.

I Rose Like a Rocket: The Political Education of Theodore Roosevelt

FROM THE PRELUDE, "Practical Politics:"

The New York State Legislature, which has convened in Albany since it became the state capital in 1797, epitomizes politics as plate tectonics. It represents an ancient clash of opposing forces: downstate versus upstate, Republican versus Democrat, conservative versus liberal, insurgent versus incumbent, reformer versus party-liner. Each January, for more than two centuries, the legislators have migrated to this modest river city, like the shad that have spawned in the Hudson River from time immemorial. One hundred and fifty miles up the Hudson from Manhattan, the lawmakers convene to renew their seismic political battles. Tremors are commonplace and full-scale quakes are expected. In a city settled by the Dutch, which thrived in the Colonial era because of a bustling beaver trade, the coin of the realm in recent centuries has been the acquiring, spending, and replenishing of political capital. Corruption, from the imperceptible to the spectacular, is as central to the rhythm of Albany across the ages of its political history as the tides on the Hudson River estuary.

The atmosphere in Albany during the legislative session is part carnival, part college fraternity. Some of the city's denizens are just passing through, looking to ride along on the political parade for a little while. Others arrive full of idealism and a burning desire to make meaningful change. A few seem perplexed to be elected public officials in the state's capital, as if they had awoken from a Rip Van Winkle-like slumber to find themselves holding a seat in the Assembly or Senate. It's a dream job for some, a nightmare for others. Many build their reputations here. A few sacrifice their respectability on the altar of politics, learning the rules only to abuse them. The Legislature is a closed system, a kind of political union shop. The principles of prep school secret societies guide its old boys' network, clubby familiarity, oaths of loyalty, and rituals of initiation.

Shortly upon arriving at the State Capitol in Albany as a freshman assemblyman from Manhattan in January of 1882, Theodore Roosevelt received his first lesson in the ceremonials of this secretive subculture. The State Legislature was a world removed from Roosevelt's familiar universe of cloistered privilege and enormous inheritances in Manhattan's Gramercy Park neighborhood. Albany, by comparison, was a rawboned, outlaw frontier town.

Roosevelt was a boyish-looking and scrawny twenthy-three-year-old who stood just five feet eight inches. His education began in a dim corridor outside the Assembly chamber, where he was ambushed by "Big John" McManus, a massive brute and former heavyweight boxer who played the role of chief thug for the Tammany Hall political machine. McManus was an intimidating presence for Tammany, which had its tentacles wrapped around every stratum of the Legislature and state politics.

McManus had been milling about on the third floor of the Capitol with a crew of his sycophants, who were stirring up a plan to knock Roosevelt down a few notches and to pound some of the Harvard pretention out of this young, cocky newcomer. McManus was rallying coconspirators around a plan to toss Roosevelt in a blanket, an embarrassing gag of that era tantamount to the prep school prank of flushing an underclassman's head in a toilet bowl. Roosevelt had caught wind of the hazing being contemplated against him, however. He confronted the massive McManus. Although Roosevelt was a head shorter and some one hundred pounds lighter, he locked eyes with McManus and spoke through clenched teeth, the veins standing up on his sinewy neck. "By God! McManus, I hear you are going to toss me in a blanket. By God! If you try anything like that, I'll kick you, I'll bite you, I'll kick you in the balls. I'll do anything to you -- you'd better leave me alone."

Roosevelt's spirited tirade stopped the brutish McManus in his tracks. Quickly sensing that his coconspirators were losing their nerve, McManus called off the blanket tossing and his entourage of thugs cleared the Assembly corridor. Little Teddy Roosevelt had stood up to the bully of the Legislature. It was an auspicious beginning for the youngest state legislator ever to have been elected.