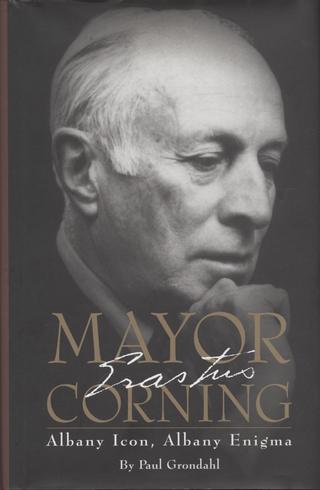 From Chapter 9: "A Big Fish in a Little Pond: The Politics of Mayor Corning"

The monstrous blue Plymouth convertible, all chrome and fins, lumbered down State Street in the five o'clock swelter of a late-August day in 1977 and swung left on Pearl Street, revealing a sign on the car's door that read: "If Anyone Knows More About Albany, Vote For Him."

High above the city's busiest intersection just crossed by the Plymouth, a huge billboard was erected atop a building with a campaign slogan visible clear across town. It proclaimed: "Keep The Mayor Mayor."

The sixty-seven-year-old inside the gleaming convertible flashed a familiar, winning smile -- the "million-vote smile" it was called -- and pedestrians along Pearl Street turned to bask in the powerful glow of that gaze. They pointed and waved. An elderly woman mouthed the words, "God Bless You, Mr. Mayor."

At the corner of Clinton and North Pearl, the car pulled to a stop under the Palace Theater marquee. The most powerful man in Albany, Mayor Erastus Corning 2nd, grimaced with pain as he stepped out of the car and moved to shake hands with a knot of people just off work, waiting for the bus.

Corning walked with a pronounced limp, his right hip flaring into an aching stab with each step, despite prescribed painkillers. The hip's ball and socket had been destroyed by arthritis, worn bone grinding on worn bone, making it painful even to stand, and doctors, unbeknownst to the public, had determined the mayor needed an immediate right hip joint replacement.

Corning informed his doctors the operation would have to wait until after the election. This was more important. It was nothing less than his political life at stake.

"He was out every night campaigning in addition to all his other duties and the schedule was enough to kill a person half his age," said Harold Greenstein, an alderman and Common Council member who campaigned for Corning. "His hip was killing him, so he used the convertible so he didn't have to walk as much. That name Corning was pure magic. We'd run in front and say, 'Mayor Corning is coming!' and people would run out from their houses to shake his hand."